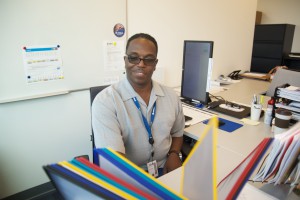 If you could go back in time to the 1960s, when Brookley Aeroplex was an active Air Force base, you might see Quality Assurance Lead Steven Brown as a young man, riding his bicycle around the grounds.

“I actually grew up across the street from here. I was a member of the Civil Air Patrol on Brookley Air Force Base, and as a kid I used to ride my bike over. The security guards used to let me come in and ride around,” Steven said.

Born in Chicago, Steven became a Mobilian when he was still in swaddling clothes, and it was here that he was inspired to pursue a career in the Air Force.

“What really sparked my interest in the Air Force? Mobile had a guy named Mel Showers. His brother was my best friend, and when Mel came back from the Air Force, he got a job in television news. During that time, in the 1960s, that was unheard of—a black man being on the news. So, I kind of looked on that as hope,” Steven said.

As Steven graduated high school, in 1973, jobs were leaving Mobile, not coming to it as they are today.

“All the industries were closing. There was no reason to stay. When I graduated, the first thing I did was get out of Mobile. I went to college, but I dropped college and joined the Air Force, and I continued my education there,” Steven said.

After 26 years with the Air Force—11 of them in active duty—Steven began a commercial airline career at NorthWest Airlines.

“I left in 2005 because they went on strike. Then I worked for the Army for two years at Fort Belvoir, Viginia,” he said.

After stints with USA3000 and Virgin America in Miami, Steven decided it was time to come back home. With First Flight now in the history books, he’s glad he did. And he says he has a question for those who said Mobile couldn’t get the job done.

“It’s a great sense of accomplishment, knowing you had a part in something that’s historic. Before Airbus came to Mobile, the word in aviation was there was no aviation and aircraft building skill here. But I knew the traditions Mobilians keep close to their hearts, and our rich history of ship-building and manufacturing, and production,” he said.

After a long and storied aviation career, Steven says he’s glad to have ended up with Airbus right here, where his story began.

“If there’s one thing I like about working at Airbus it is the openness of management. I mean there is no sense of levels. When I see a manager, no matter what level they are, my name is called. I’m greeted, and engaged in conversation. If I have anything on my mind, I can share it. That’s awesome,”

Steven said. “There are no barriers to communication in this company. And whatever you say to them, you can see some action down the road.”

As he looks forward to eventual retirement after a career spanning two armed services and four decades, Steven Brown has some words of advice for those coming along behind him. Get a job in manufacturing.

“If you have the opportunity, manufacturing is the best way to go. I spent 40 years in active 24/7 flight operating areas such as hangars, heavy checks, flight line and operations, and it was all stressful. With manufacturing, you have defined shifts and weekends off and holidays. I can actually make plans with the family. Take that path. Then, you can go to any area later,” he said.