For Blake Johnson, Safety at Airbus Mobile is Personal 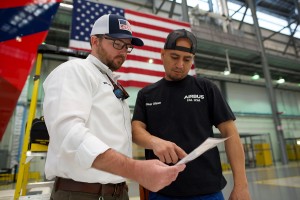 For Environmental Health and Safety Specialist Blake Johnson, the issue of safety at the Airbus U.S. Manufacturing Facility in Mobile is a personal one.

A marine biologist by education, Blake and his fellow team members are responsible for environmental compliance and occupational health and safety in and around the Final Assembly Line. And that, Blake explains, is why his job has a personal dimension.

“When I say it’s personal, I know the names of all the men and women who are working hard to make this facility a success. I know if they’re married. I know if they have children. In my view, in order to have an effective safety culture, those personal relationships are imperative,” Blake said.

Inspired to pursue his career path in part by fishing trips with his father, Blake knew from the age of five that he wanted to be a marine biologist and play some role in supporting the kinds of marine ecosystems that he and his father enjoyed so much.

He also enjoys the fact that part of his job involves engagement with the larger Mobile area community. Blake is a member of the employee-driven Community Relations Committee (CRC), which helps determine what community organizations the team supports, with the active backing of senior management.

“My role on the Community Relations Committee is an environmental focus, so I’ve chaired events relating to Alabama Coastal Cleanup and the Dauphin Island Sea Lab’s Discovery Day,” Blake said. “Just having those opportunities has been great.”

“We had a great turnout from employees from the FAL and Airbus Engineering Center,” Blake said. “It was great to see the collaborative effort for the benefit of the local environment.”

Blake’s professional background, prior to joining Airbus in the fall of 2017, was in the chemical industry where he was an Environmental Engineer, so building a culture of safety in a manufacturing organization is nothing new.

It was easy enough, then, for him to embrace General Manager Daryl Taylor’s conception of Airbus Mobile as a “Safe, Positive, Productive” workplace.

“With Team Mobile, safety and productivity are not two separate goals. They are simply aligned, and we have buy-in from upper management that makes that possible. We truly have commitment both from the highest-level of the company and at the facility here in Mobile,” he said.

Having been trained as a scientist, with an advanced degree to show for it, Blake appreciates the fact that, at Airbus, his decisions can be data-driven. In fact, he’s helping provide leadership for an initiative that uses data trends to proactively head off work-related injuries.

He and his EHS colleagues are also focused on the issue of ergonomics—the study of working safely and effectively and how it relates to the human body.

“We want to protect our people now and tomorrow and that’s what our focus on ergonomics is all about: different body positions, ways to modify workstations to better fit an individual, tools that maybe weigh less or don’t vibrate as much. We’re always looking at ways to improve ergonomics throughout the facility,” Blake said.

The team has also achieved a meaningful milestone by attaining the coveted ISO 14001:2015 certification. This certification is a voluntary internationally recognized standard which sets out the criteria for an effective environment management system. This recognition brings the Mobile Final Assembly Line in line with 56,000 colleagues in 20 sites across 7 countries and shows a strong commitment to sustainability throughout an aircraft’s lifecycle.

What is it like working for Airbus in Mobile at a time of expansion and growth? For one thing, it means new opportunities for professional growth and promotion. Later this month, Blake will assume the position of Senior Environmental Health and Safety Specialist at the new A220 Final Assembly Line, currently being constructed near the A320 FAL.

“I would say that there is an electric atmosphere, a buzz at the facility. It seems like every week you turn on the TV there is a new story, so there is a constant excitement at the site about upgrades and enhancements and new orders,” Blake said.

It’s all part of a journey that began with something as simple as fishing with his dad. As a graduate student at the University of South Alabama, Blake imagined settling in the Mobile area, close to the marine environment he loves.

These days, when he isn’t working to make the FAL an even safer place for his friends and colleagues to work, Blake is happy to live where he can teach his daughters how to fish and pass along his love of nature to the next generation. And it doesn’t get more personal than that. 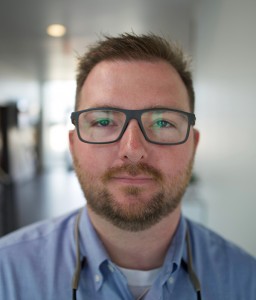 When he’s not working on environmental health and safety at the FAL, Blake enjoys spending time outdoors with his family.