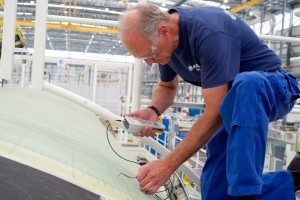 “It makes me happier. I like this position—a new environment, working on new aircraft. Seeing them fly and deliver. It’s better,” Dan said.

As one of two Non-Destructive Test Specialists at the FAL, Dan is responsible for using a combination of ultrasound and eddy current analysis to test any area on an aircraft that needs it.

“If something is dented, or questionable in any way, the quality department is called out to evaluate it, to document it. Then, they send it to engineering, and they determine the work processes that are needed,” Dan said.

If NDT is required, either Dan or his colleague, Christopher Kantz, conducts the required tests. With conductive materials that can mean an eddy current test.

“It works off of eddies, little pools. An electric probe passes a current and voltage through the material, and the sensors can detect where the eddy currents are disrupted, and it shows on the screen,” he said.

Ultrasound (ultra-sonic sound waves passed through the area being analyzed) can be used on both conductive and non-conductive materials. It’s particularly useful in testing those components that are made of composite materials, like wing tips, flaps, ailerons, the radome, and both the horizontal and vertical stabilizer.

Where does Dan’s interest in such technical aviation subjects originate? The answer lies just across the Florida state line.

“I was born in Pensacola, grew up there much of my life. It’s the cradle of naval aviation, and I lived close to the airbase. I had T-28s, T-34s and A-4s flying over my house. My neighbor was a Commander; he was at Pearl Harbor when it was bombed. I watched him build his own plane in his garage, a miniature Mustang, and I got interested,” Dan explains.

It wasn’t too many years before Dan had a pilot’s license, an instrument rating, and an aircraft of his own, an acrobatic Bellanca Citabria.

“Another guy and I bought it and we overhauled it—put a new engines in it, repainted it, put in a brand new interior, and overhauled the wheels. It was a lot of fun,” Dan said.

After working his way up the ladder in the aviation industry—mechanic, structures mechanic, systems mechanic, shift manager, hanger manager, and shops manager—Dan became proficient in NDT techniques. But working with Airbus has been a career goal since the tanker project was announced.

Dan spent three months training in Toulouse, and another at the A320 FAL in Tianjin, China, where he learned to like the spicy lunch fare.

“I would go up to a Chinese colleague, and I would ask ‘what should I get.’ I would get it, eat it, then ask what it was,” Dan said. “The food was awesome in France, too.”

Although his wife joined him for a side trip to Barcelona, where she got to make use of her college major in Spanish, Dan’s glad to be back home on the Gulf Coast and watching aircraft go from parts to plane to delivery. He doesn’t think it will ever get old. 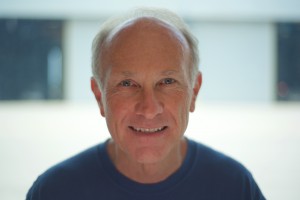 When Dan Clipper isn’t conducting Non-Destructive Testing at the FAL, you’re likely to find him in Tennessee, playing with his grandsons—ages 4, 2 and one month.