For Susan Drews, Aviation is a Family Affair 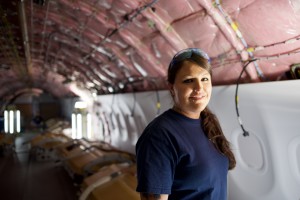 On a sunny day in San Diego, California, Tim Strachan took his young family aboard the USS Enterprise, the world’s first nuclear-powered aircraft carrier.  A welder in the US Navy, Mr. Strachan knew a thing or two about the many aircraft that lined the decks of the “Big E,” as the carrier was known within the Navy.

With him that day was his daughter Susan, born on March Air Force Base, not so many years before, along with her two younger brothers. Viewing the aircraft and clambering around the various decks and hangars that day on the Enterprise, Susan’s growing interest in the Navy was solidified.

“That’s when I knew I wanted to do something in aviation. Top Gun had just come out, and it was my favorite movie. Seeing my Dad, and looking up to him, I knew it was something I wanted to do. I just dreamed of one day being in control of these amazing aircraft. So, when I got out of high school, I wanted to go into the Navy, like my Dad,” Susan said.

Before long, Susan’s wish would be granted. She joined VAQ-129, a training squadron for the Prowler EA-6B as an Aviation Ordnanceman, but soon she was promoted to Plane Captain, in charge of the aircraft she had dreamed of working with.

Before leaving the Navy, Susan would serve on three US carriers: the USS Nimitz, USS George Washington, and USS Stennis, where she would be named Sailor of the Day out of a crew of more than 3,500, and allowed to steer the ship.

Having grown up, in part, in Pascagoula, Mississippi, she returned to the Gulf Coast for a job with VTMAE, where she met her future husband. There she would spend a decade, first as a mechanic, and then a lead mechanic, specializing in interiors. She followed the progress of construction at the nearby Airbus Final Assembly Line, and then watched as Airbus became a part of a larger revitalization in the Mobile area.

“I appreciated what they did for our town, what it meant for things like restaurants and shopping,” she recalled. And, in the back of her mind, she says, she thought about working at the FAL.

“I followed Airbus on Facebook, and I saw how everyone was so proud as they celebrated the delivery of the first aircraft. Everyone was so positive, and I know that when the people who work somewhere are happy, you’re more likely to be happy working there,” Susan said.

Following the birth of her third child, Susan felt ready to take on a new career challenge, so she applied and interviewed and, in the Spring of 2017, joined Airbus as a Cabin Furnishings Mechanic.

According to Susan, it’s the best career move so far.

“It’s like family. The managers and even our General Manager are so open. I feel like I could walk up to Daryl Taylor and talk to him if I have a problem, but our lines of communication are so good, I can tell anyone what I think they need to hear,” Susan said

Susan credits that extraordinary atmosphere and the opportunity for promotion from within as among the best aspects of the work environment at the Mobile FAL.

“They’re consistently posting jobs. Our supervisor just moved up from being a lead. We promote in-house, and give you a chance to move up. I’ve only been here a short time, but I’ve seen it a lot,” she said.

There’s also, she said, a process to stimulate professional growth and development.

“Our PDRs (planning, development, and review process) help us grow professionally. It helps you push forward, and earn raises, and to progress in your profession. You’re working with a good team of people, with a lot of comradery. And my family loves it because I come home less stressed,” Susan said.

When she’s not working, you’re likely to find Susan at a drag-racing track with her husband, who manages a local speed shop, and is a mechanic and drag-racing specialist. Her children, now 18-months, 12 and 17 years old, travel with them, making it a thoroughly family affair.

And that, after all, is how Susan’s aviation story began, all those years ago on the deck of the USS Enterprise. 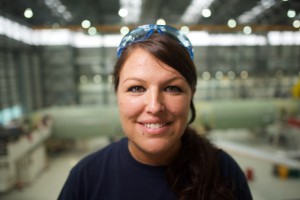 In her free time, Susan enjoys activities with her family, including participating, not just spectating, at drag-racing events.