Megan Large was bitten by the travel bug young 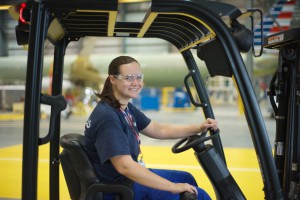 Chalk it up to the fact that she grew up near an airport, or maybe it was the decade she spent in the aviation travel industry, but Megan Large loves to travel.

A Ground Handling Specialist, Megan can run down a list of far-flung places that top her list. But the reason to pack up and go, from her point of view, isn’t to just see the sites.

“Any time you can take a break and get out of a place that you’ve spent most of your life in, and get out into the world, and see how other people live and are—the things they celebrate and love—you get a new perspective. I think you come back a slightly different person every time,” Megan said.

Maybe that’s why it comes as no surprise to Megan that she’s learned more than just how to handle a sixty-ton aircraft from those among her colleagues at the FAL who do not call Mobile their permanent home.

“Every day is a learning experience, and not just learning from colleagues about how to put the plane together, and put it together well. It’s also a learning experience about each other. There are things they celebrate and get excited about, they bring to us, and of course there are the things on the Gulf Coast that we’re so proud of and excited about that we give to them,” Megan said. “It’s been a really neat experience.”

If you ask Megan, this give and take and atmosphere of respect for each other’s culture makes a real difference in keeping open lines of communication within teams, starting with her own.

Said Megan: “It was a hold your breath moment, with the engines really going, and all three sets of landing gear went up. We kind of exhaled together. It was a release of some excitement and a little bit of tension, and everything we had been gearing up for since last June.”

What’s the one thing Megan says she likes best about working for Airbus?

“It’s being part of such a team environment. Because I’ve worked in aviation before, so planes are not brand new to me, but working here is a great example of how people can come together, and have open involvement. The slogan ‘the door is always open’ is an actual fact here. You’re supported here. I feel supported 100%, which is very nice,” she said.

And now, with the first plane built and flight tested, Megan reflects on the inaugural chapter of the Mobile FAL.

“You expect some things in a startup operation, but all in all, it went very well in my opinion. Very well,” she said.

As for the future, Megan Large is thinking about her sister, 15 years her junior.

“I’d like to think I’m that I’m doing this with my little sister in mind, to show her she can do other things. This, to me, is the perfect company for that,” she said. “You can try to take yourself as high as you want to go.” 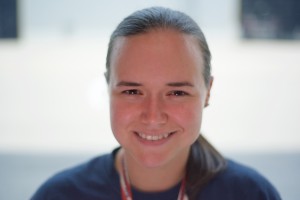 This time of year, when she’s not working, you’ll find Megan and friends kayak fishing near Dauphin Island, where they like to catch reds and sea bass.