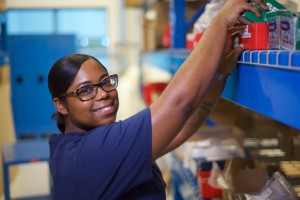 If you grew up in Long Beach, Mississippi and never ventured outside the state until the age of 20, it would be easy to be intimidated to take the role of Tool Room Attendant at the FAL. After all, you’re constantly working to keep track of $5,000 tools, and to ensure they are properly calibrated and ready for use at a moment’s notice.

But Ryane Deadeux can take it all in stride, because in her previous job with the U.S. Navy, she made bombs. And made sure they were safely loaded onto F-18 fighter jets. After that, everything else is a little less intimidating, it seems. So much so that she’s recently been promoted to Xplant Quality Inspector.

“At first it was hard to adapt to everything. My first assignment was in Japan, and nothing there is in English, so it took an adjustment.”

Before long, however, she not only adjusted, but thrived in a wide variety of countries and cultures, including Hong Kong, Bahrain, Malaysia, Dubai, Hawaii, and her favorite—Thailand, where she fell in love with the food.

Her five years in the military also helped ready her for a job that requires her to track and maintain calipers, torque wrenches, drills, screwdrivers and non-destructive test equipment.

“When I was in the Navy, I took it upon myself to go to the different shops and learn about them. I learned about engines, about structures. I didn’t just want to know bomb making. I would sometimes go 24 hours without sleep so I could just go out and learn,” Dedeaux said.

Through three deployments on aircraft carriers, including the USS Stennis and the USS Nimitz, the military training also instilled a certain mindset that she says makes her better at her job today.

“I had never been in a tool shop like ours, or used a caliper, but I had a certain mindset that fit the job well. In the Navy, each shop was in charge of their own tool program, and it was engraved into our heads just how important it was to take care of and track our tools,” she said.

To anyone considering a career in aviation, Ryane’s advice is “go for it.”

“Do it. Because with our modern economy, no career is promised to you. But aviation will never die. Ship building will never die. There will always be a need for skilled workers in those industries,” she said.

“Here, I can thrive and grow professionally. How many people can say they work with people from different countries to build an aircraft? It’s a blessing. Not a lot of people get this kind of opportunity.”

Ryane feels right at home in the multi-cultural environment at the FAL.

“I was used to it, after spending so much time in so many different countries, but it is still a great opportunity to see every day the diversity and the cultures that are represented. Everyone is working with everyone else, and it opens up your mind and educates you to the broader world,” she said.

She said that although it will be good for Americans to fill jobs at the FAL, she will be sad to see her expatriate colleagues, from whom she’s learned so much, return home.

Her most memorable moment at Airbus thus far?

“It would have to be the day at the inaugural celebration, when I put the sticker on with Fabrice Bergier. I have never been so nervous as I was in front of all the people, and with the head of the company right there,” she said.

Even though she was nervous that day, she did manage to tell the CEO of the company that she wants his job before she’s done. Perhaps that kind of confidence comes from having been a bomb maker, too. 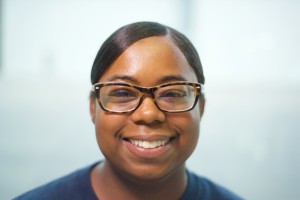 When she isn’t helping the tool room run smoothly, you might find Ryane fishing. She recommends squid for bait, because it’s tougher for the fish to nibble it off the hook.