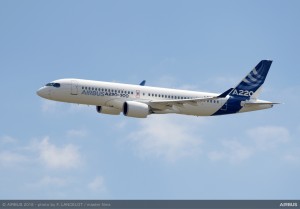 The wings came from Ireland, the tail planes from Italy, and the cockpit from Canada, but when an Airbus A220 taxis out for its First Flight at Brookley Aeroplex later this year, it will be the know-how and capabilities of Team Mobile that make it fly.

To commemorate the historic first-ever manufacture of an A220 in the U.S., Vice President and General Manager Daryl Taylor has proclaimed 2020, “The Year of the A220 in Mobile.”

“You only get to do something for the first time once, and we intend to give the historic first American-made A220 its due this year at the Airbus U.S. Manufacturing Facility in Mobile, Alabama,” Mr. Taylor said.

“This year, Team Mobile will deliver our 200th A320-family aircraft, and we are proud of that. But, it’s exciting to add one of the hottest planes in aviation today, with the A220 now being assembled in Mobile,” he said.

The Airbus A220 has quickly become popular for use on mainland routes. Its wider seats, larger overhead bins, and dramatically (20%) lower fuel burn and CO2 emissions per seat made it an instant standout in the single aisle class of commercial aircraft.

Vice President of A220 Program in Mobile Paul Gaskell said his team is ready to assemble and test the state-of-the-art A220, with delivery this summer.

“It’s been a big team effort to bring A220 manufacturing to the U.S. in a relatively short time,” Mr. Gaskell said. “It’s only been two and half years from announcing our intent in October 2017, getting approval for the partnership in July 2018 and starting construction of the main production hangar in January 2019. Now we’re within months of completing construction and delivering our first aircraft. It’s amazing, and all credit goes to team work and dedication of the teams here in Mobile and in Mirabel.”

It’s no wonder that more than twenty-five firm customers, from Air Austral to Swissair, await delivery of an A220. U.S.-based customers Delta Air Lines has ordered 95, and Jetblue 70.