Today Airbus held an event in Mobile announcing the increase of capacity at its U.S. Manufacturing Facility with the building of a new Final 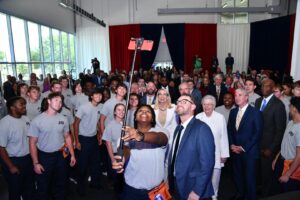 In addition to the new assembly line, Airbus will build a paint shop and modify hangars with a double bay by the end of 2023 to increase FAL rate capacity.

The event concluded with a media Q&A and reception.