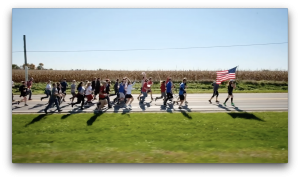 The relay is an epic journey where military veterans will run, walk and wheelchair one American flag from the U.S. Capitol in Washington, D.C. to the Opening Ceremony of The Games at Protective Stadium in Birmingham.

An expected 3,600 elite athletes from more than 100 countries will compete for gold, silver and bronze medals in exciting and emerging sports from July 7-17 at The World Games 2022, which is organized with the support of the Olympics and takes place every four years. This year marks the 11th edition of The World Games and the first that will be held on U.S. soil in over 40 years.

“It’s going to be an incredible moment of national unity to watch veterans bring the American flag into the Opening Ceremony in front of a live, global audience as our country plays host to thousands of athletes and fans from every corner of the world,” said Nick Sellers, CEO of The World Games 2022. “We are thankful to our partner Airbus for making this possible and can’t wait to track the progress of Old Glory as our honored veterans take the flag on this epic journey.”

“Airbus is proud to be the presenting sponsor of the Old Glory Relay and to support this incredible effort that will connect veterans from across the country to an inspiring mission,” said Daryl Taylor, Vice President and General Manager of the Airbus U.S. Manufacturing Facility in Mobile, Alabama. “A significant portion of our workforce at Airbus served our nation in uniform, so we are especially honored to partner with The World Games 2022 to show our admiration and support for America’s veterans.”

Team Red, White and Blue (Team RWB) works to support veterans by helping them find lasting fulfillment through the creation of deep bonds with other veterans and civilian supporters.

“Each time the American flag is passed from one runner or cyclist to the next during its epic journey from Washington, DC to Birmingham, Alabama, it builds a valuable connection and unforgettable pride” said Team RWB’s Founder and Executive Director Mike Erwin. “We are fired up to partner with Airbus in this year’s Old Glory Relay and look forward to inspiring millions of people on the journey, most importantly on July 7th when we carry the flag into the Opening ceremony to help kick off The World Games 2022!”

Plans call for the Old Glory Relay to begin in late May and culminate on July 7 as the flag is carried into Protective Stadium to herald the start of The World Games 2022. The Opening Ceremony, presented by Alabama Power, will be a colorful and entertaining celebration of sports featuring live musical performances, special effects and a parade of athletes from every competing nation.

Mobile, Alabama became home to Airbus’s first U.S.-based commercial aircraft manufacturing facility in 2015. Since then, the facility has grown from an initial workforce of 250 to more than 1,000 employees building both the A220 family and A320 family aircraft.