Astronauts of the future may have Zachary Peavy to thank 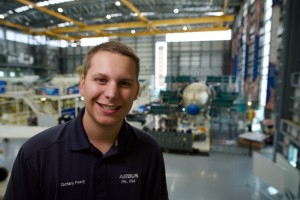 Before he became an Airbus Process Performance Engineer and began work on his first project with Team Mobile, Zachary Peavy had already played a key role in another high-flying project.

Working with two dozen colleagues at the University of South Alabama and the National Aeronautics and Space Administration (NASA), Zachary helped design, construct and test a prototype of the Automated Microgravity Agricultural Experiment Station.

As a part of his senior project, Zachary and other engineering students joined forces with a group of horticultural specialists to create a working model of the kind of system that will be needed on NASA’s Gateway—the lunar-orbiting space station that will be a stepping-stone to inter-planetary flight.

“Our project was called ‘Farmbot.’ NASA recognized a need for an automated farming solution that can operate unattended for months at a time,” Zachary explains. “Our job was to design and build a prototype. We had to do design reviews with NASA personnel, via videoconference.”

A part of NASA’s X-Hab challenge, Farmbot tested concepts and demonstrated how an automated system could take plants through each stage of growth: seeding, germination, growth, harvesting, and recycling, with automated control of moisture and lighting. The project successfully germinated and grew plants and manipulated them mechanically without human intervention. A scholarly paper about Farmbot is in the works that will soon be published in a peer-reviewed journal.

“The hard part was it had to work in microgravity. I learned a lot. It even helped me learn more about project management,” Zachary said.

As it turns out, Zachary’s work on Farmbot was solid preparation for his career thus far at Airbus, where he routinely applies those project management skills.

While at the University of South Alabama, the Citronelle native interned with Airbus, beginning in the early summer of 2017. After graduating in May of 2019 with a B.S. in Electrical Engineering, Zachary began his job as Project Performance Engineer in Mobile and has since become Tool Deployment Work Package Process Leader for the REACH project.

REACH, which stands for “Registration, Evaluation, Authorization, and Restriction of Chemicals,” is a set of European Union regulations that aim to improve the protection of human health and the environment from risks posed by chemicals. It is a key element in Airbus’ commitment to maintain high environmental and health standards throughout the global enterprise.

“We are deploying new sanders and other tools with vacuum attachments, so as to become ever-more compliant with REACH standards,” Zachary said.

“Along the way, I’ve learned a lot about management, Airbus processes, how to be a leader, and how to manage projects alongside my regular daily work,” he said.

Zachary has also helped lead projects that allow Airbus to analyze, track, and display data relating to the manufacturing of aircraft, and an integrated planning tool that keeps track of the seemingly countless steps and processes required to build a state-of-the-art commercial jetliner.

Zachary remembers being fascinated by engineering from a young age. As an Eagle Scout, Zachary put his skills to work helping build a gazebo for Home of Grace, a rehabilitation center for women working to overcome addiction.

While pursuing his degree, he found he could directly apply skills he learned in the classroom to his work at Airbus.

“My internship at Airbus prepared me for data analytics, where to find the data, and how to manage my time,” Zachary said. After joining Team Mobile, he noticed a change taking place within himself.

“All my life I’ve been a relatively quiet person. But now, in my position, I have to push myself out of my comfort zone, talk to people, and learn from them. I’m much more able to put myself out there now than I ever was before,” Zachary said.

That transformation was possible, he said, because of the welcoming atmosphere he found at Team Mobile.

“I love the environment. We are, truly, one Airbus, one global company. The camaraderie is awesome and it’s great to be a part of that,” Zachary said.

That true sense of teamwork proved to be an asset when a global pandemic forced a temporary pause on the Flow Line in Mobile.

“My team and I became much more agile when it comes to supporting each other when working remotely. I also appreciate more what other members of the team accomplish on a daily basis,” Zachary said. “I believe Airbus has handled the situation very well. The FAL made sure everyone is safe while working by having a cleaning crew and following the CDC guidelines.”

Zachary and his wife, Victoria, enjoy travelling. They have a 19-month-old child and another on the way.

“We’re in the process of figuring out how to travel with young children,” Zachary said.

That’s one more reason it is a good thing he’s a process performance engineer. 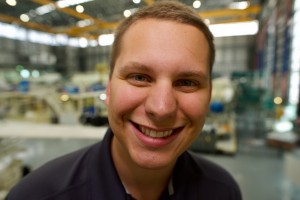 Zachary Peavy and his wife Victoria are expecting their second child and beginning to plan for the day when they will be enjoying their passion for travel, this time with two young children.