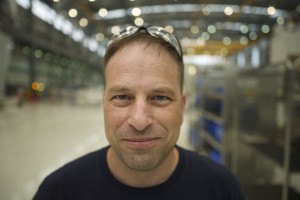 For 13 years, Aircraft Systems Installer Peter Jackson helped keep EA-6B Prowler aircraft mission-ready for the United States Marine Corps. For most of that time, Peter was based in Cherry Point, North Carolina, but was often deployed to one of five countries, including Iraq.

Peter was part of a team that ensured the electronic warfare aircraft could fly missions and safely return to base with pilot and a crew of two or three. In Iraq, that sometimes meant dealing with incoming mortar fire. But serving in the Marine Corps fulfilled a dream that began for Peter during his Michigan childhood.

“I wanted to be a Marine since almost as long as I can remember,” Peter said. “By the time of my enlistment, I also knew I wanted my job in the Marines to be something that offered a future.”

After departing the Marine Corps in 2008, Peter worked in and out of the aviation industry. In 2016, he began working with Team Mobile as a contractor, and became a full-time employee in January of 2017.

Since joining Airbus, Peter has seen both striking similarities and clear differences between his time with the USMC and Airbus.

Among the similarities: both organizations are committed to excellence. And, because roughly 30 percent of the workforce in Mobile have served in the military, Peter works with a lot of team members who can relate to his own past history.

“There are five or six Marines just on our station,” he said.

Another thing the two jobs have in common is a lot of time goes into to getting the job done right.

There are differences, too, of course. For starters the lead time necessary to achieve the ultimate mission objective.

“In the Marines, the aircraft you are working on may need to fly in an hour,” Peter said.

Another difference is that the atmosphere at Airbus allows for more open lines of communication, both within and across teams, along with a less rigidly hierarchical structure.

“In the military, you wouldn’t see a Private First Class or a Lance Corporal talking directly to someone who is running another unit. Flexibility can be a good thing,” Peter explained.

Still, when production obstacles present challenges, Peter naturally relies on the same principles that made him a success in his military career: dedication, commitment to accomplishing the mission, and—perhaps above all—teamwork.

“It’s hectic and challenging at times. There will always be unforeseeable events that will throw something at you. But aside from a hiccup here or there, we’ve done really well,” he said.

In the summer of 2017, Peter became a lead on a team whose responsibilities include installation of the critical parts of the aircraft that are responsible for horizontal and vertical trim, along with all of the connections and rigging that entails. But even though he has assumed a leadership role, it’s hard to get Peter to talk about it in those terms. He keeps coming back to the concept of team.

“I’m in a lead position, but I always want to keep more of a team orientation. Everybody is important to the team and needs to know they are appreciated,” he said. This approach, Peter points out, is consistent with doing things the Airbus way.

Peter said, “Leading by example is well established here. People in a leadership position are not lazy. Leads on our stations work hard. If you’re not willing to do what you are asking other people to do, you will be in a world of hurt. I’m there to help and support the team.”

Peter also sees his job as something of an eternal quest for operational perfection. Through continual improvement and innovation, Peter and his team are striving to meet an elusive ideal.

“Rome wasn’t built in a day, but we’re always looking for ways to close the gap between where we want to be and where we are,” Peter said. He finds it helps to have strong support from the management of the final assembly line.

“It’s obvious people in leadership care,” Peter said. “They do their part and we all do our part. Everything that each of us does is connected, in some way, to what everyone else is doing.

With more than 20 years of experience under his belt, Peter offers advice for those just beginning, or even considering, a career in aviation. It boils down to one of two paths.

“You could get your A&P (Airframe and Powerplant) certification, or because you do not have to have your A&P to work at Airbus in some positions, you could find a way to get your foot in the door and then move up the ladder once you have some real world experience,” Peter said.

Either way, he says, Team Mobile is a great place to start because it has such great potential.

“This is a facility with a future. We’re growing and expanding. There are so many opportunities. There is a way forward for everyone here,” Peter said.

When he’s not working, you might find Peter going to the movies or playing video games with his four children—three boys and one girl, ranging from 14 to 19 years of age.

But wherever you encounter him, it’s easy to see principles like dedication and commitment shining through.

In his free time, you might just run into Peter on the Battleship Alabama, an area attraction he highly recommends.