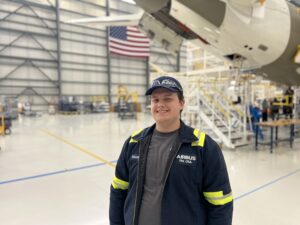 In the late Spring of 2019, Alex Wood was sitting in class at Satsuma High School when he heard an announcement about a new program being formed by Airbus and Flight Works Alabama.

“We had a presentation at our school my junior year,” Alex said. “At the time, I was really worried about paying for college, so I went to the meeting.”

Soon, there was another meeting, at Brookley Aeroplex, and before long Alex found himself in the inaugural class of a program called FlightPath9, learning the fundamentals of aircraft manufacturing.

“We learned how to use certain tools that are normally used for aircraft. Basic stuff, like avoiding FOD (Foreign Object Debris) and how to work around an aircraft—the general aspects of working in aviation,” Alex said.

The first-ever class of FlightPath9 quickly gained the basic skills they would need to join the Airbus team on either the A320 or A220 final assembly line. Then, the COVID-19 pandemic hit.
Alex recalls an anxious few months when the future of the program and the new career path he had laid out for himself hung in the balance.

“At the time we were still in high school, with only two or three months left. We were originally to have started working on the shop floor in mid-June at Airbus. So, when the pandemic hit, we were wondering whether it was all for nothing,” he said.

FP9 instructors and administrators had to quickly devise a plan that would help get their first group of students through a crisis unlike anything they had ever experienced.

“We were afraid maybe they would just get rid of us or start over, but none of that happened. They postponed our FP9 classes and gave us opportunities during all of it to come and help at Flight Works, which was still being constructed. Overall, it went astonishingly well. They kept in touch with us, made sure we were all doing well. Except for the classes being postponed, it was like it didn’t happen,” Alex said.

When the pandemic eased and FP9 classes resumed, Alex and his fellow students began to take on more challenging tasks.

“Towards the end, we started the actual hands-on experience with FlightPath9. We learned how to shoot rivets and HI-LITES™ and HI-LOKS™ (fasteners), which I had never done before. They give you a six-by-six-inch plate of aluminum and our workbook gives you the measurements and you measure and drill your holes, then put P fasteners in,” Alex said.

“I would say to keep the aircraft safe. We can’t afford to be complacent. You have to keep in the back of your mind the fact that people are going to fly on this aircraft. It all has to be done just right,” Alex said.

Throughout the course of instruction, Alex said he was amazed by the extraordinary level of commitment of his instructors.

“They were very willing to put a lot of time and effort into training people who had no prior knowledge of aviation, or how to work on an aircraft. Nick Varn was one of our instructors and the manager of Station 40 on the A320 line at Airbus at the time. He worked eight or sometimes ten hours a day and then taught high school kids another four or five. Wow. So, a lot of commitment there,” Alex said.

In early January of 2021, Alex made the transition to Apprentice, beginning work on the A320 program with the Cabin team. After eight months, he transferred to the A220 and stayed there until he became a fully-fledged Airbus employee on April 1, 2022.

Today, Alex is a Structures Assembler on the A220 program. It’s a job that he says has changed his life’s course.

“My original path was to go to a four-year college and potentially be in debt for half my life. Now, I’m here two years after high school making really good money. I have my own apartment; I’m pretty much self-sufficient. And I’ve only been out of school two years,” Alex said.

Alex’s family is proud of his accomplishments at such a young age.

“My mom and dad were always a little worried about me going to college and all of the expense, so they saw this opportunity and were excited about it. FP9 took us on a tour and my dad got to come along and he’s still astonished by what we do at Airbus,” Alex said. Alex also has a lot to talk about now with a family member who works at a maintenance, repair, and overhaul facility.

What advice does Alex have for high school students considering applying for FlightPath9?

“I would just say that FlightPath9 isn’t just for the mechanically inclined. Most of us had no experience at all and we’re thriving here today. It’s not a difficult program if you apply yourself. I never felt really stressed out during the program. So, if you have the slightest interest, you should try it out.

“They start you at the very beginning and work you all the way up. And then when you get on the floor, you’re with someone all the time, so if you have a problem with a tool or whatnot, they help you solve it,” Alex said.

Alex said once you work at Airbus, there are ample opportunities for advancement and to branch out to other specialty roles. 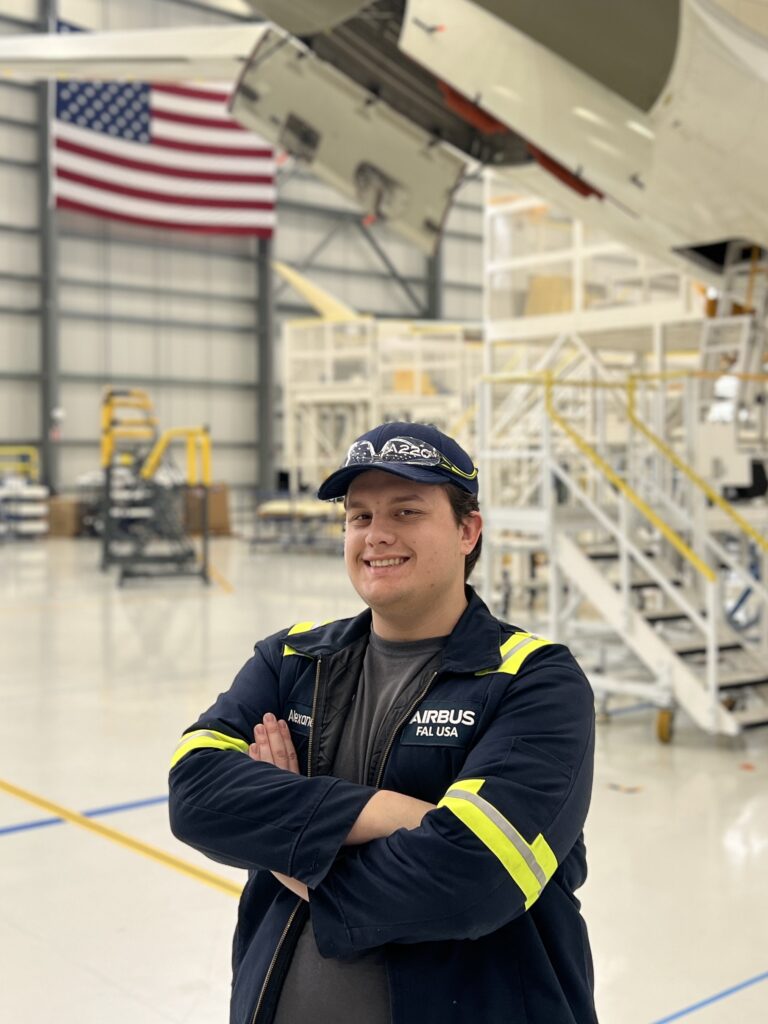 “I know numerous people that I started to work with that have moved up and up in the company within very little time. And there’s so much here. You can work on the HR team, there are engineering people upstairs, the management. Even if you go through FP9 for a hands-on job, you don’t have to end up there,” he said.

Where will the journey that began in a high school classroom take Alex Wood? There’s still plenty of time to work out what the next chapters will be.

“I’d like to get my experience level up before I move on to anything bigger, but maybe a lead position would be interesting someday. I might get my A&P (Airframe and Powerplant) license. Maybe work on the Flight Line here one day. I’m just rolling with it for now,” Alex said.