Valerie Castrillon never gave up on her dream 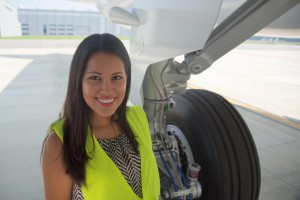 Born and raised in Lima, Peru Valerie had no idea that a career in aerospace engineering was in her future. After moving to the U.S., and becoming president of her school’s Phi Betta Kappa chapter, she happened to meet astronaut Fred Haise, a member of the harrowing Apollo 13 mission and astrophysicist Neil deGrasse Tyson at a conference. Something clicked, and she realized she was fascinated by physics and engineering.

“I had never really cared for math, but I took some math classes and I came to realize I actually love math, it’s like a game. So, I changed my major to aerospace engineering and started to look for universities that offered strong programs. I was accepted to Georgia Tech and Auburn University, and chose Auburn,” Castrillion said.

“The day I walked into the Engineering Center at Auburn, someone told me ‘Airbus is coming to America, and you will graduate just in time to work for them.’ I decided then and there that working for Airbus was my dream job,” she said.

But the path from dream to reality was a rocky one. Although Valerie studied more French, even making it her minor, and applied for every Airbus internship she could find in Europe, she had to suffer through months of rejection.

“From 2012 until 2015, I had 90 letters of rejection. You think your chances are over. You get discouraged. So I decided to go to Europe and finish my French minor, and I studied French that summer and travelled around Europe. But I wasn’t about to leave Europe until I visited Airbus in Toulouse,” she said.

Once she was back stateside, she received a job offer from another company. Although she interviewed with Airbus, no job was available for her immediately.

Then one day, she got the telephone call she had been waiting for: a job offer with the Mobile Final Assembly Line.

“I said yes a million times,” she said.

Castrillion says the thing she likes best about working for Airbus is the opportunity to develop her career while working in a global environment, absorbing the various cultures that are represented.

She also appreciates the open lines of communication that characterize the FAL.

“As a new college graduate, I had to prove myself, but people are actually listening to me. If you put forth the effort, people will listen to what you have to say. We work things out together, as a team,” Castrillion said. “I am blessed to be in a company that has good leadership.”

Valerie says her perseverance in pursuing her dream job has paid rich dividends.

“I’ve only been here six months, but I’ve grown a lot,” she says.

In short, she’s loving her job. And that’s a good thing in any language. 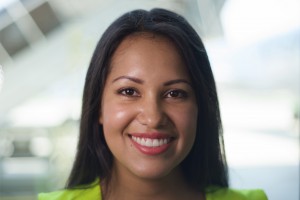 When she isn’t working, Valerie loves to travel, especially to the little towns that are less touristic. “Something about the small towns and not having a signal on my cellphone makes me happy,” she says.