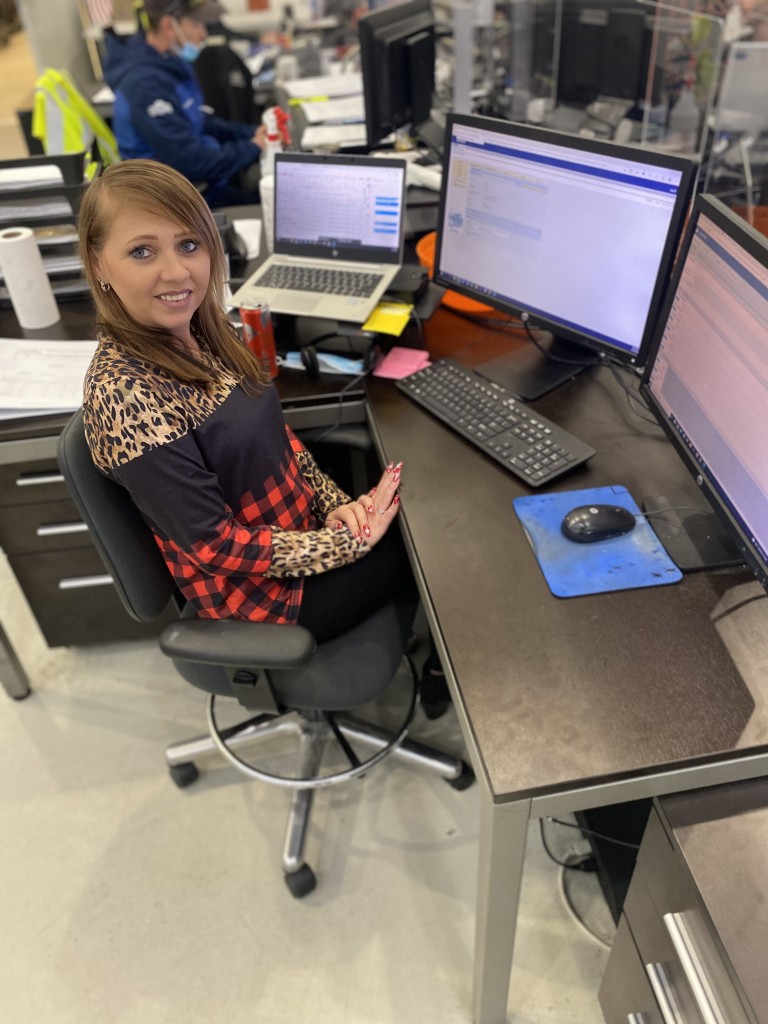 Not so long ago, Aircraft Manager Anna Tucker felt stuck in life. A single mom at the time, she got up early every morning to cook breakfast at a gas station, then went to work at a distribution center in Baldwin County, just to make ends meet.

“I was doing all I could to support my kids, but we were still living paycheck to paycheck. I met my husband in 2014 and I got a job assembling wire harnesses for an aviation company, but I was still only making $11 an hour and it seemed like I wasn’t getting anywhere,” Anna said.

A native of Atmore, Alabama who grew up in Perdido, Anna discovered there was a job opening for an aircraft electrician position at Airbus. There was only one problem.

“I knew nothing about airplanes. I had never even stepped foot on an airplane,” Anna said. “I had no aviation experience. I had no college degree. I had some college, but it had nothing to do with aviation.”

That’s when, as Anna tells the story, Airbus saw something in her that she didn’t necessarily see in herself. She got the electrician job and started work at the U. S. Manufacturing Facility in Mobile in January of 2017, working on Station 40 on the A320 Final Assembly Line.

It soon became clear that the company’s assessment of Anna Tucker and her potential had been right on target.

“That’s all it took. I haven’t stopped since. I got my Delegated Inspector certification within a year and a half. Within two years, I was Lead Electrician on Station 40. And in September of 2021, I made the step from hourly to salaried employee when I was promoted to Aircraft Manager,” Anna said. “Airbus gave me the opportunity and I took off running with it.”

Anna’s extraordinary work ethic and commitment to excellence has changed her life.

“Before, we were just getting by. But in June, we purchased our first home, and I couldn’t have done it without Airbus. It wouldn’t have been possible,” Anna said.

Anna said Lead Aircraft Electrician was a job that came with a great deal of responsibility. It required hooking up all electrical equipment, connectors, plugs, and the various computers on the A320-family of aircraft.

Now, as an Aircraft Manager, Anna’s responsibilities have grown further.

“An Aircraft Manager tracks the progress of the aircraft, the build of the aircraft. So, if there are any open non-conformities when the aircraft comes into a station, we track it and make sure the station has all the parts they need to get these NCs closed before the aircraft moves on to the next station or to the Flight Line,” Anna said.

Anna is quick to credit her managers and business unit leaders for helping her gain the confidence in herself she needed to master her first job and to advance along a career path.

“When I was in my first job as a basic electrician, I was thinking, ‘this is it for me. I’m just going to be an electrician on station 40 for the rest of my career, ‘because I didn’t have that confidence in myself. But I had managers and business unit leaders that pushed me and now I do have the confidence in myself. I pushed myself to be what Airbus sees in me when I didn’t even see that in myself,” Anna said.

“There’s so many people here who are in your corner that want to see you succeed. They don’t try to hold you back. And that’s what I love about the company. They see potential in somebody, and they want to push them forward. Instead of just being a number, just a person that works at Airbus, they see the potential that I have, and they encourage me to get to where I want to be. And it’s amazing. The support system here is amazing,” she said.

“I went through a future leaders training. When station managers or business unit leaders see potential in someone, they can put them in this class and help them build up their confidence to be an operations leader or an aircraft manager, taking that step from blue collar to white collar.

“I think it was a six-week class and I learned so much. I wasn’t big on getting up in front of people and speaking, and in this class, I gained the skills and learned tricks and tips to speak in front of a group and to have confidence in taking on that next role. Here, you’re constantly learning different things. You’re not stuck,” Anna said.

Anna’s advice to anyone interested in a career in aviation is straightforward.

“Jump in feet first. It’s a whole world of opportunity. There’s so much you can do in aviation, not just within Airbus, but any company in aviation. Even if you don’t think you can do something, you have a whole team behind you that that will help push you. You just need the work ethic and the drive to do it. You can go anywhere if you have that drive,” Anna said.

When she’s not at work, you might find Anna pulling for her Crimson Tide football team. Or, if it’s any Saturday night from May to September, cheering on her oldest son, who races dirt track cars.

“Most Saturday nights that time of year, we are in a pit somewhere at a dirt track. His little sister is his biggest fan,” Anna said.

But when it comes time to go back to work, it’s not with the sense of dread that used to be the norm in Anna’s life. The reason, she explains, is the people she works with.

“The people are great. I don’t come to work and say, ‘oh my, I have to go back again.’ I’m excited to come to work. I want to come to work because of the people that I work with. Everybody wants to help one another. And it’s just the whole comradery of it. It’s like a family pretty much,” Anna said.