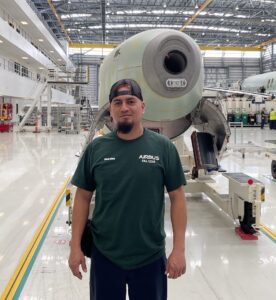 You will see Omar Alava in every corner of Mobile’s U.S. Manufacturing Facility, from the moment of inspection at the trans-shipment hangar all the way to the delivery center. Omar is originally from Lima, Peru, making it to the U.S. when he was 12.

Like many folks who work in aviation, Omar’s passion began early. During long flights as a kid, he would notice the plane hurtling through the air at high speeds, “200+ people surrounded by a piece of metal moving up and down and side to side. From a young age, I realized how important it was for everything on these machines to be perfect.” Originally, he dreamed of being a pilot, but being away from home and his kids led him to a different career path in aviation.

Omar spent his first 12 years in aviation in repairs (Mobile Aerospace), where he learned the finesse needed for the aviation sector firsthand, “It was a great school for me. You can’t teach these kinds of things in a classroom: how the business works, what is good, bad and acceptable both cosmetically and functionally,” he explained.

This led to one of the more memorable days of his career: participating in a flight test. Mechanics were needed on the flight, and many weren’t keen on the experience. He was. “Let’s go! Why not try it,” Omar recalled thinking. “It was great, because the pilot is trying it out along with you – it’s all about confidence in what you have built.” And Omar was confident that the bird would be fine and the flight test would go without a hitch.

And it was quite the experience. They climbed up to 33,000 feet and turned off the engines, commencing 15 minutes of silence in the air, “We descended to 25,000 feet – you could hear a pin drop on the plane.”

An announcement comes from the flight deck, “Ready to relight engines.”

Engine one turns on, followed by engine two and the plane’s roar returns. “I knew that we had done a good job. It reiterated the importance of my job – all our jobs – in aviation,” Omar remarked.

Proud to be Airbus

Omar began his Airbus career in production, in X-Plant Production, as a mechanic. X-Plant employees don’t work at any particular station at the Final Assembly Line, they move around making sure that everything, everywhere, is how it should be.

One year ago, Omar joined the quality team as an inspector. His perfection mindset drives his work as a Quality Inspector, “I come from the re-work production part – any deviation from the drawings and normal standards, we are there to correct it. My job requires teamwork. In aviation – mediocrity puts everyone in danger.”

Omar isn’t shy about his love for the job, or indeed for Airbus. Earlier this year, when the U.S. Manufacturing Facility hosted Family Day, Omar’s parents dropped by. “They so proudly wear their Airbus gear everywhere, proud of me and what I have accomplished,” he explained. A sentiment that leads him to double down on his efforts to ensure quality. “My parents, my children, my friends all fly on aircraft. I work behind the scenes to ensure that once they’re in that seat, they will be safe.”

His children remain his motivation.