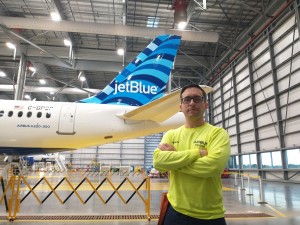 Jorge Gomez-Giraldo and his twin brother were born in Medellin, Colombia and raised by a single mother who worked hard to provide a life for her boys.

“There were not too many resources in our family, so we had to do our studies in public schools and public colleges,” Jorge said. “The technical school set my career in motion.”

There, Jorge studied to be an aircraft mechanic, which laid the foundation for everything he’s done since.

Jorge said, “I don’t like to do things halfway, so I started it, I finished it, and then everything came together without even thinking about it. So, it was kind of an accident starting this career, but here I am.”

After graduating in 2008, Jorge had a chance to use and develop his skills in the Colombian Air Force.
“I liked the military life. It was a good opportunity I was given, so I took it,” he said.

Through six years in the armed forces, Jorge gained experience on a wide range of aircraft models and systems, while also developing his leadership skills.

“In the Air Force, I had personnel under my command, so it was a good experience for me,” he said.
Jorge moved on to a position as an aircraft mechanic for a Colombian airline, then took a job with a maintenance, repair, and overhaul company in Miami. But he always had a bigger dream.

“In Colombia, we knew about Airbus and other big manufacturers in aviation. But, as a mechanic in Colombia working for those companies is a dream. So, when I came here to the U.S., I said, ‘Okay, let’s give it a try.’ When I got the notice I had been hired, it was kind of like making a dream real,” Jorge said.

Now Jorge is using his talent in a manufacturing environment for the first time, initially as Flight Line mechanic, and now as a Team Lead on the A220 Flight Line. As the leader of six team members, his job is to make sure all work to be done on the aircraft in the delivery stage is performed correctly and in time to comply with scheduled milestones.

“Every day is a learning process,” Jorge explained. “Every day I think I improve myself—my professional career and even my social life is better, because I’m meeting people from different cultures, learning different ways of thinking. Every area is improving for me.”

And that, Jorge says, makes it a pleasure to come to work every day.

One of the biggest challenges: dealing with the COVID-19 pandemic, which hit the U.S. soon after Jorge came to work at the Mobile FAL.

“At first, I thought I’ve finally made it to a big company like this and six months later the pandemic hits and everything is up in the air. So, I think, in general, Airbus did a good job and is still doing a good job because we’ve been able to keep our jobs. It kind of makes you love your job more because you are here and can make a living,” Jorge said.

The pandemic has kept Jorge from seeing his mother far too long to suit him.

“I am planning to bring Mom here to the U.S., but because of the pandemic I haven’t been to Colombia, and she can’t come here, so I call her every night. We do video calls to reduce the impact of being so far apart.” Jorge said.

Thanks to Jorge’s hard work and career success, he said he’s now able to provide better living arrangements for his mother and brother.

“My mom took care of us on minimum wage. Back then, just thinking of having an expensive dinner in a fancy restaurant was impossible, but now I can do that. We can enjoy food we never had before. And it’s not the money, it’s the happiness of sharing those moments with my mom that we couldn’t enjoy before. Mom is proud of me for reaching my goals, and that gives me a morale boost to keep going.” 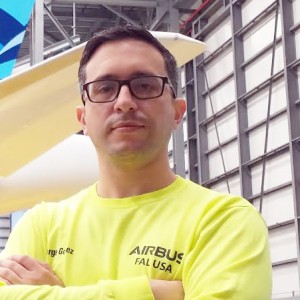 In his time away from work, Jorge looks forward (once pandemic restrictions are a thing of the past) to traveling with his family, learning new cultures and tasting new and different foods.