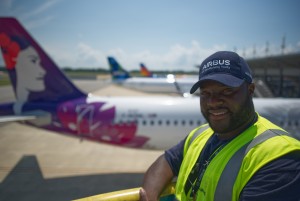 As far back as he can remember, Wendell Powell has always loved to tinker with things. Take the time his mother’s space heater quit working.

“She was going to throw it out. I was still pretty young, but I said let me see if I can fix it. It’s broken anyway. Turns out the element needed to be re-soldered,” Wendell explains. “So, I fixed it, and she still uses that heater to this day.”

Wendell came by his mechanical inclinations naturally. His father is a master of many skills.

“My Dad worked many jobs to support us: carpentry, brick mason, chef, trucking. Trucking is how he got into CB radio, which explains where the solder came from, because he started building electronics projects,” Wendell said.

A math and science fanatic, Wendell initially chose to study chemical engineering at the University of South Alabama. Although he maintained a good GPA, it somehow wasn’t the right fit. Soon after, he learned about a two-year program in aviation from a family friend.

“I went to the college and signed up. From that day to this one, that was the best decision I ever made,” he said.

After he landed a job at a local aviation maintenance, overhaul and refurbishing facility, the company paid for tuition, licensing, and even provided a space on-site for students to study and prepare for exams.

“I’m very grateful to them. They gave me a great start in aviation. I ended up with two associate degrees in applied science, one for airframe and one for powerplant, and my A&P license” Wendell said.

So, when a former co-worker suggested he apply for a Flight Line mechanic’s job at Airbus, Wendell said it took some persuading before he joined the company in January of 2017.

“I was comfortable where I was and had risen to assistant lead at age 27. But my friend said, ‘Airbus is the place for you.’ Now that I’m here, I’m happy. Everything he said it would be, it’s that and more,” Wendell said.

“The culture here not only made me feel at home,” he said, “it made me feel part of something bigger than myself. They say what they mean and mean what they say. This is the only company I’ve been a part of that put ink on paper saying, ‘if we don’t uphold our core values, call us out for it.’”

Through it all, the scariest part was taking the self-inspection exam. And the happiest? Passing it, of course.

These days, Wendell is enjoying the increased pace of production at the Final Assembly Line.

“The pace has picked up, and that’s exciting, because you look forward to getting another aircraft every week, and getting it delivered at the proper time and to a happy customer. When you know it’s on time, right, and safe, it’s a great feeling,” Wendell said.

“Where else,” Wendell asks, “can you be a part of a company that is this global? When you see accomplishments by Airbus in Europe on the news, you know you’re a part of it. That’s what it means to me. My dad calls me and says things like ‘I heard about the new drone,’ and I’m a part of that global brand.”

And to think it all started with a broken space heater. 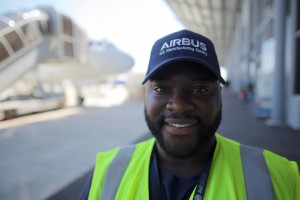 When he’s not at Airbus, you might find Wendell and his wife, Adrian, enjoying their favorite cities: New Orleans and Destin.